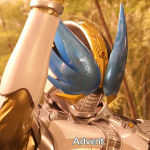 Last time we left off on a cliffhanger battle on Let’s Watch Wednesdays! But this week we see the result of Kamen Rider Den-O VS Kamen Rider Zeronos!

And continuing this week we start with a question. Why doesn’t Yuuto want to make new friends? Despite being likable he strives to be alone only keeping Deneb close. Is there something sinister hidden here? And it’s time for the advent of a new hero! The 5th Imagin of Den-Liner appears, the enigmatic, the aristocratic, the elegant swan himself, Sieg! And his human brother?! This just begs more questions. In answering them a new form will be born, Den-O Wing Form! But only briefly. In 3 weeks time this form will rise again in a feature film adventure. Next time we begin our perilous journey into the movies’ time travelling antics as Ryutaro is kidnapped at multiple points in his life!

Now that we’ve cycled through the first 4 Imagins of the Den-Liner, it’s time to take a look at the resident goofball of Zero Liner, Deneb! Deneb  is partially based on Benkei, a warrior monk popularly known for taking up residence at Gojo Bridge in Tokyo and standing guard over it. Collecting 999 swords from passing swordsman as he defeated them. Benkei was a warrior bound by his honor and was the trusted retainer of Minamoto no Yoshitsune, often placing himself in harms way for his master much like Deneb.

Deneb is named after the star Deneb in the constellation Cygnus, which has heavy ties to the tradition of Tanabata. Deneb serves as the connection between the lovers Hikoboshi (Altair) and Orihime (Vega). As the stars of Altair & Vega, Deneb is seen a bridge between the two. Hence why the two main forms of Kamen Rider Zeronos are  Altair and Vega, and the difference between them is Deneb himself.

So it’s time once again for you to join us in our weekly discussion of all things Kamen Rider Den-O! Head on over to our thread this week by clicking “Discuss on the TokuNation” forums at the bottom of this post! And remember that Let’s Watch Wednesdays will be taking a week off next week as TokuNation begins it’s FULL on site coverage of all things San Diego Comic Con 2014! To find all of our news from the convention simply click this link!