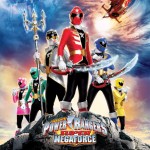 If you’ve been missing new adventures of the Power Rangers Super Megaforce, good news – we have a date on when they will return! The bad news? You still have over another month to wait. Thanks to Fury Diamond and his Samurai Cast Blog, we know that Power Rangers Super Megaforce will return with all new episodes on Saturday, August 30th on Nickelodeon.

The first new episode will actually be Episode 09 of Super Megaforce titled “The Power of Six”, where Jake must get over his jealousy of Gia and Orion to help Orion use the combined powers of the past sixth Rangers in order to defeat a new monster. For those who didn’t follow Kaizoku Sentai Gokaiger, that means it’s the premiere episode of the Gold Mode for the Super Megaforce Silver Ranger, where he utilizes an armor with the faces of all the previous sixth Rangers.

Excited for Super Megaforce to return? Or are you just counting down the months until the premiere of Power Rangers Dino Charge? Join in the discussion!