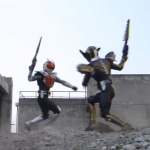 Let’s Watch Wednesdays returns from a small vacation thanks to our SDCC coverage. But we’re back, Kamen Rider Den-O has pulled into the station once again, and things are a bit nutty for Ryutaro. Yuuto’s devilish smile, ninjas, all the Imagin, dinosaurs, a new rider, this is the Climax Scene. But what & when is it? What are we building to? Beginning or perhaps ending here is the story for Den-O’s first theatrical film, Ore tanjou!

Ryutaro is disappearing from his own timeline, kidnapped by Zeronos & Deneb!? Events from the past and future collide and all out of order! This can only be a movie tie-in! These events lead directly into, or out of (oh you know how time travel works by now), the Ore Tanjou movie! For now we know that the terrible Kamen Rider Gaoh has arrived and to control all time he’ll take Den & Gaoh Liners for himself! But future Yuuto has assembled various Ryutaro’s from across time to stand against Gaoh! Get ready because next week we take the leap into the first of many Den-O theatrical films! It’s time for a Climax Scene!

Fun Fact #9
Rounding out the Imagin of the trains of time is Sieg! This impromptu 5th member of the Den-Liner gang has only briefly appeared on the show but will make a proper debut in next weeks film, Ore Tanjou. For now you should know that Sieg’s character is derived from the ballet Swan lake. Very different from the other Imagin, Sieg is somewhat based upon Prince Siegfried, a selfish and vain aristocrat who wishes to marry for love but simply has none in his heart.

But love finds Siegfried when he witness a swan he’s about to kill become a beautiful woman, actually the swan queen, Odette. The victim of a dark spell, Odette and her kind can only be freed if she is loved by one who has never loved before. Siegfried. Via a rather convoluted story of betrothals and princely courtship the pair eventually affirm their love and die together in the titular lake, thus breaking the spell on the other swans.

Be sure to join our weekly discussion thread for Den-O by clicking “Discuss on the Tokunation Forums” at the bottom of this post!