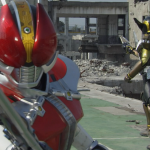 It’s time for Let’s Watch Wednesdays once again here at TokuNation. And although we’re still steaming downing the tracks with Kamen Rider Den-O, this weeks installment brings us to the first of many Den-O Theatrical films. This week we view Kamen Rider Den-O The Movie: Ore Tanjou!

Kamen Rider Gaoh, has appeared. Intent on controlling and erasing time itself he’ll take Den-Liner & Gaoh Liner to rider God’s Line.  Hana & Ryutaro will travel to the past and encounter Ryutaro’s younger self, Sieg will return for a proper debut with Wing Form, and Yuuto will go back in time to find help. Last week we saw Yuuto & Deneb creating all kinds  hijinks, kidnapping Ryutaro from various points in time, all for the Climax Scene. Well the Scene is officially here, and the power of 4 Den-O’s will unite against Gaoh with all of time at stake! But before that we’ll have some fun with a new rider, Mini Den-O!? It’s a wild ride this week, but you can be sure there will be repercussions from this film. Next week we’ll see just what happens to Ryutaro after the Climax Scene.

Getting back to actors in this franchise, let’s take a look at this films big villain Kamen Rider Gaoh! Played by veteran actor Hiroyuki Watanabe, Gaoh’s costume is based on Den-O Sword Form but has a Crocodile motif. Something that wouldn’t turn up again in rider design until OOO BuraKaWani combo. Sadly Gaoh’s suit no longer exists physically as it was scrapped for parts to produce the Kamen Rider Yuuki suit in one of Den-O’s later films, Final Countdown.

Mr. Watanabe, having had a rather long career, was no stranger to tokusatsu before this role. He portrayed the Xig Commander Ishimuro in Ultraman Gaia, Taiga Saejima in Garo & it’s spinoff Beast of the White Night, and beyond Den-O he would go on to appear in the rebooted Karate Robo Zaborger film in 2011.

Be sure to click “Discuss on the TokuNation Forums” at the bottom of this post to join this weeks theatrical discussion!