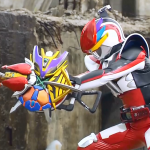 Kamen Rider Den-O has pulled back into the station for another round of Let’s Watch Wednesdays @ Tokunation!

Memories are time. As long as people hold onto them, the time erased by Imagin can be restored. Even the people lost can return. But if no one remembers you, you fall through the cracks of time ,travelling until you are remembered. The Sakurai Yuuto of the future has returned with more cards, forcing the young Yuuto to become Zeronos once more, and dooming him to fall through the cracks of time. Now Ryutaro’s determination to be stronger is greater than ever. To keep Yuuto from needing to transform and destroy more memories of his life, something greater must be created. Ryutaro will use his own power, Den-Liner, and the 4 Imagin to create Liner Form!

Den-O Trivia #13
We told you about the voice of Deneb, but now we’re looking at the man behind everyone’s favorite Imagin, Momtaros! Momotaros is brought to life by legendary voice actor Toshihiko Seki! Though his list of previous toku credits is primarily bit roles (Chameleon Nejire in Megaranger, Zebra Fangire in the Kiva Movie) Seki has been prolific as an anime actor.

His credits include: Rau Le Creuset in Gundam SEED, Duo Maxwell in Gundam Wing, Legato in Trigun, Iruka Umino in Naruto, and many other roles that span his nearly 30 year acting career. Mr. Seki has continued to voice the role of Momotaros since Den-O’s TV series began, even continuing the role all the way to this years Hesei Vs. Showa Featuring Super Sentai film! And it looks like there’s no end to this role in sight!