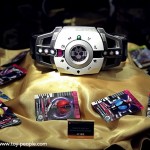 It looks like it’s time for another releases in Premium Bandai’s line of high end rider belts! Following up from the recently released CSM Kabuto Zecter its seems the next belt up for the treatment is the Complete Selection Modification Decadriver! The belt of Kamen Rider Decade appears to include at least the all the Heisei Rider cards he used to henshin throughout the series.

No word yet on what else may be included with the belt card wise, or what the price and release date might be. But we’ll keep you posted as new details and information become available.