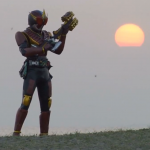 Let’s Watch Wednesdays returns to Kamen Rider Den-O but with the loss of one of our heroes. In case you haven’t noticed we’re rocking a Thursday Edition this week. Techincal difficulties on my end being to blame. But we’ll be back to normal next week.

Yuuto paid the ultimate price when his past self was erased from time. Or so it would seem. The Zeronos cards aren’t all bad after all. While the memories of a person disappear, they are protected from the ravages of time. But with no more green cards left, Yuuto must now resort to the red cards and an even greater price must be paid as well. The memories Yuuto’s made in the present will now cease to be. His past no longer exists, and now neither does his present, nor would it seem does his future. But one thing is certain, Zeronos Zero Form is a power to be reckoned with!

Den-O Trivia #15
It’s time to see if you were paying attention again! This week the show changed up something most people skip right past, the opening! That’s right, the usual rendition of Climax Jump you’re used to was replaced this week by Climax Jump Den-Liner Form. A rendition of the song sung by our lovable Imagin! Episode 40 is the first instance where the opening theme changes and the first where clips from the episode you’re about to watch are inserted into the montage.