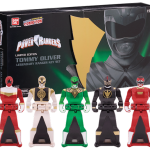 After Bandai of America had mentioned both at San Diego Comic Con 2014 and Power Morphicon 2014 that they were interested in making a more exciting exclusive for their appearances at New York Comic Con, today they revealed through the official @PowerRangers Twitter account their upcoming New York Comic Con 2014 Limited Exclusive. Fans of the character Tommy Oliver will be ecstatic to see an entire Power Rangers Super Megaforce Ranger Key set of all of the different Power Rangers that famed Power Rangers actor Jason David Frank has portrayed.

It is important to note that all of these keys are currently available at retail. This set will be released in limited numbers and will most likely run in the $20 price range. When more information comes available we will share it.