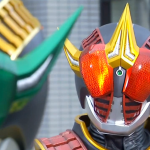 Let’s Watch Wednesdays approaches the end of everything with Kamen Rider Den-O!

The key to the past, present, & 2 futures lies with Airi Nogami, or more accurately, her unborn child! The child of Airi & Yuuto is the key to the Junction in time. Forgotten by time itself this child is too protected for even Kai to reach. Instead he’ll rampage an army of Imagin through time, even hijacking Den-Liner! One by one the Den-Liner crew will make their last stand as the battle for everything that will ever be comes to it’s conclusion! Tune in next week for the finale of the Kamen Rider Den-O TV Series!

Den-O Trivia #17
On the topic of actors again this week, let’s talk about our main hero Den-O/Ryutaro Nogami. The young Takeru Satoh made his debut in toku as the titular rider and played Den-O over the course of the entire 49 episode series as well as the first 3 movies. And although many tokusatsu alums tend to stick to their genre or return to it later, Satoh has done neither.

To this day Kamen Rider Den-O is Takeru Satoh’s only tokusatsu credit. After leaving the franchise in 2008 and having a string of jobs in the interim Satoh made an explosive debut again as another hero, this time ripped from the pages of manga. In 2012 he emerged as the titular hero in the first film of the Ruroni Kenshin live action trilogy! Satoh reprised this role for both sequels as well; The Great Kyoto Fire, & The End of A Legend.