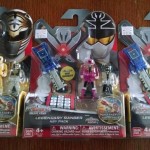 Today brings us the surprise of 3 new packs of Power Rangers Super Megaforce Ranger Keys hitting retail! Though we’re waiting for a group of other previously revealed, yet unseen packs, today brings happy news to many collectors of 3 new packs:

Each set includes at least 2 new translucent versions of a previously released key and in the Super Megaforce C pack all 3 keys are. The two MMPR packs also FINALLY round out the two female members of the team at normal retail. Previously MMPR Pink & Yellow were only available in the SDCC Exclusive MMPR set.

These 3 sets were found by twitter user @DaHoneyBooBoo at K-Mart. We also have a clear shot of all 3 packs together thanks to @InvisiblAnthony on twitter.