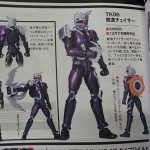 Joining the Tire Koukan line next month it seems TK-06 Machine Chaser will be more of an all inclusive package than we thought. Not only will he include his Break Gunner weapon but also all 3 weapons accessed from his Chaser Spider, Chaser Bat, & Chaser Cobra Viral Cores! This new image of Machine Chaser also confirms his compatibility with Kamen Rider Drive’s Tires!

So now we know that Machine Chaser can steal and use Shift Cars as recent episodes have shown, the toy demonstrates his ability to use Drive’s Tires, and we know that in the near future his bike the Ride Chaser will have a combination features with Kamen Rider Mach’s Ride Macher. What do all these bits of information amount to? We’ll find out in the coming months.

For now be sure to pick up TK-06 Machine Chaser which releases in December for 3456 yen.