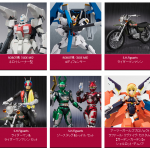 In a recent update the Tamashii Web Shop has revealed 2 more upcoming Tamashii Web Exclusive items! Though we don’t have pricing or specific release dates yet the shop has sent word along about S.H. Figuarts G-Stag & Reddie being released as a 2-pack! First revealed at Tamashii Nations 2014 this pair completes the trio of the original B-Fighters from Juuko B-Fighter! Or the original Big Bad Beetleborgs for many western collectors.

Next up is the reveal of S.H. Figuarts Riderman Machine! The personal bike of Riderman, sometimes known more simply as the “Rider Machine” was initially revealed at Tamashii Nations 2014 along with a slew of other as of yet unreleased Rider bikes. As with the upcoming Amazon & Jungler, the Riderman Machine will be available both separately as well as in an optional 2-pack with a reissue of S.H. Figuarts Riderman!

These items are expected for a May or June 2015 release. We’ll continue to update you as more information on pricing & release dates becomes available for both of these items!