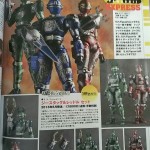 The latest round of magazine scans have given us confirmation on upcoming products first displayed at Tamashii Nations 2014!

The Juuko B-Fighter 2-pack of S.H. Figuarts G-Stag & Reddie is oa Tamashii Web Exclusive set for May release for 10,800 yen. Included are their trademark weapons of course, but they also have the bonus of their Pulsabers! We can also see from the scan below that the set includes Blue Beet’s Pulsaber as well!