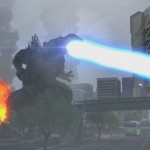 Godzilla will be making his roaring debut onto next gen consoles with a new video game coming out this summer!

For those of us that are anticipating this release, new screenshots have been released courtesy of Bandai Namco Games. Here we see Godzilla himself battling against King Ghidora and Mecha Godzilla.

Godzilla The Game will be released July 1st 2015 for both PS3 and PS4 consoles.