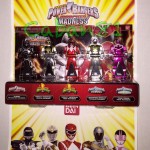 Congratulations to @CABAN81 and the other 4 winners of Morphin Madness!