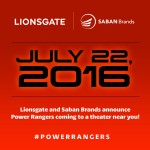 After what seems like a rather long time without any updates for the forthcoming 2016 Power Rangers film reboot, some new information has finally surfaced!

According to The Wrap, Saban Brands & Lionsgate Entertainment are currently eyeing and in fact are in negotiations with director Dean Israelite to helm the film! Israelite’s most recent project, likely his most recognizable to the public, is the time travel “found footage” thriller The Almanac Project.

Does this news make you hopeful for the forthcoming film? How does it affect your likelihood of seeing it? Let us know in the comments!