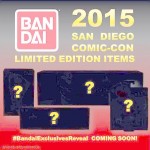 Did you know that San Diego Comic Con 2015 is barely a month away? We’re headed there once again for the third year in a row to give you the most in-depth coverage of everything at the show including interviews with Bandai of America and Saban Brands and other manufacturers of your favorite Power Rangers toys!

Today on Instagram, Bandai of America teased out four blacked out images stating that they will begin revealing the exclusives for this year’s SDCC later this week. But thanks to site contributor and Ranger Nation member @trekkieb47, we’ve been able to deduce exactly the four exclusive items that are coming from Bandai of America!

Now – we can’t say they’re confirmed, or at least, we can’t confirm the details. But we have a pretty good idea. They are as follows:

This marks the third year in a row where the Mighty Morphin Green Ranger and/or White Ranger has more or less dominated the exclusives, causing the fans to groan out once more, “STOP FOCUSING ON ONE CHARACTER FROM ONE SERIES OVER 20 YEARS AGO!”

What do you think of this year’s exclusives? Sound off in our discussion thread and make your predictions – see if you’re right or if we’re right!! Special thanks to Rangerboard.com for the better quality original teaser image!