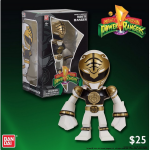 Teased mere days ago in Bandai of America’s offerings for San Diego Comic-Con 2015, one of the mystery items has been officially unveiled!

For sale exclusively at the Bandai of America booth for SDCC 2015 is the White Ranger Tokyo Vinyl Figure! This figure will retail for the reasonable price of $25. With only 2 items yet to be officially revealed yet and the convention itself less than 1 month away we should see the rest of the reveals in the very near future!