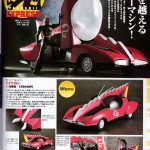 The first non-bike vehicle used by a rider, Rideron dates back to 1988’s Kamen Rider Black RX. We didn’t see another true car for a rider until the current Kamen Rider Drive began. And it’s the release of S.H. Figuarts Tridoron for Drive that’s finally made Rideron’s release possible!

And what’s the even better news you might ask? Rideron will be a retail release! Shockingly it is NOT a web exclusive! However as with Tridoron, S.H. Figuarts Rideron will be rather pricey at 19440 yen, and is scheduled for November release.