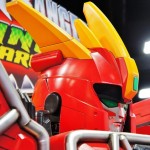 This one is a little out of the ordinary for us but it was still pretty awesome either way. During San Diego Comic Con 2015 we spent a lot of time chatting with Bandai America, both casually and on the record about the future of the franchise and so forth (click here to see our on-the-record interview!). One of the cool things they mentioned was that the Dino Charge Megazord that has been at all their booths during this year’s convention cycle is the actual Kyoryuzin suit used in Zyuden Sentai Kyoryuger!

That’s right – Bandai America paid to have Toei ship the suit for Bandai America to show off during the convention cycle. You know what that means? Remember the image of our own Sentai Tamashii holding the Dino Charge Megazord sword at this year’s Toy Fair? It means he was holding the screen-used weapon from Kyoryuger.

So if you’re headed to New York Comic Con 2015 this year, be sure to reach out and gently touch this awesome piece that will one day find its way back to Toei for storage in the museum!