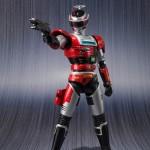 Confirmed for release only hours ago, now thanks to the usual Tamashii Pickup post for new reveals we have a selection of official images for S.H. Figuarts Fire from Tokkei Winspector!

S.H. Figuarts Fire is looking incredibly sharp in these official images, though so far we only have a limited number to go on. They do at least confirm the inclusion of Fire’s Maxcalibur arm blade as well as his Daytric M2 handgun in both pistol form & baton/holster form.

S.H. Figuarts Fire is set to be release in January 2016 for 6480 yen and has the unique honor of being the first S.H. Figuart Metal Hero that has been released at normal retail rather than as a web exclusive.