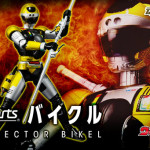 After months of speculation about this figures release, the trio of heroes from Tokkei Winspector is 1 step closer to completion! Arriving in June is S.H. Figuarts Bikel!

Bikel is one of Fire’s 2 robotic allies the 2nd of which Walter, has yet to be confirmed for release. But his cameo in the official images for Bikel is telling. In any case Bikel is set for release as a Tamashii Web Exclusive for 7020 yen. Bikel also has a pretty imrpessive array of accessories including 4 sets of hands, 2 of his Bispear weapons, the Winspector standard sidearm Daytric M2 pistol, & Demitasse. The small robot created by Mr Nonoyama to aid Winspector.

Get with your preferred Tamashii Web Middleman today to secure your order!