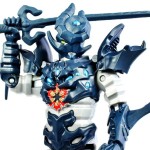 There’s a new villain in town and his name is Snide! And it’s up to the Power Rangers Dino Supercharge Rangers to stop him as he takes the reigns from the former villain, Sledge, in an attempt to gather the Energems and conquer the universe!

Check out over 25 high resolution images of this character by clicking here or on the “Discuss on TokuNation forums” link as well as our review! What do you think of this figure? Do you share our opinions? Sound off!