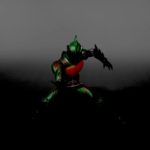 S.H. Figuarts Kamen Rider Amazon Omega is so far the first figuart to be revealed from the current Kamen Rider Amazons web series. A half red half green teaser image was initially shown for this event last month and many speculated an Alpha & Omega reveal. With half of that pairing officially happening, what do you think our chances of seeing Amazon Alpha at the event are now?

Sound off in the comments below, we’ll keep you up to date as more images and possible release info are made available for S.H. Figuarts Kamen Rider Amazon Omega!