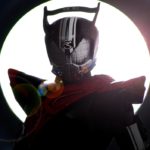 Along with this figure a single teaser image for S.H. Figuarts Kamen Rider Zero Drive is also included. This form debuted in Ghost & Drive Super Movie War Genesis and represents a pre-Type Speed version of Drive.

Neither figure has confirmed release details at this point, but we’re expecting much more information to become available at the Tamashii Features event this weekend, May 21st & 22nd!