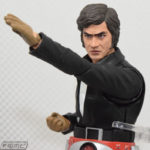 A new pair of items has just gone on display at Tamashii Features 2016! Kind of an odd couple, neither of these figures currently has any confirmed release details at all, but they’re so cool we had to share them.

First up is S.H. Figuarts Takeshi Hongo! Representing actor Hiroshi Fujioka as he appeared in 1971’s original Kamen Rider series, this figure would potentially be the first ever figuart released of a tokusatsu hero in their civilian form. Could this be a new trend further down the line? Next up is a unique possible re-release of an old favorite. S.H. Figuarts Kamen Rider Black Luminous Ver. A reuse of the incredibly popular Black Renewal figure but with the added feature of LED compound eyes! A Tamashii “Stage Act Wireless” set is also apparently included with this figure.

Again neither of these reveals are confirmed for release but they were simply too incredible not to share. All image of Hongo & Black come courtesy of Dengeki Hobby Web.