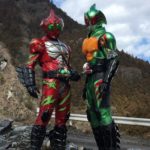 If you’re a fan of the current Kamen Rider Amazons streaming Amazon Prime series, then hold onto your seat, 2 very exciting pieces of news have just broken.

First up, as reported on by the Hollywood Reporter & Deadline, Kamen Rider Amazons season 1 (along with a small host of other programs) will begin streaming internationally on Amazon’s Prime service! That means that US fans as well as those of many other nationalities will be able to stream the series legally outside of Japan.

Certainly not be outdone by this news, Amazon Japan has also just revealed plans for a 2nd season of Kamen Rider Amazons set for production and release in 2017! We would assume that it will also eventually be available on the US streaming side. In either case these are both truly exciting pieces of news. Stay tuned for updated!