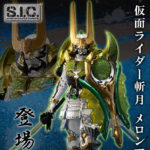 Zangetsu has been seen at a couple of events alongside S.I.C.’s of Gaim, Baron, & Ryugen for the last several months and so far is only the 2nd S.I.C. figure from Gaim to have confirmed release info. As with any S.I.C., Zangetsu gets his own spin on his standard design including an optional way to display the armor in Samurai pedestal style. He also includes a Musou Saber with interchangeable blade as well as an insanely cool version of the Melon Defender with a bonus pincer mode.

S.I.C. Kamen Rider Zangetsu Melon Arms will be released in November as a Tamashii Web Exclusive for 8856 yen.