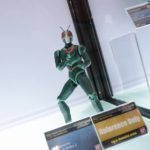 Long hoped for by collectors it seems we may be one step closer to finally having S.H. Figuarts Kamen Rider J! J, is currently on display at Chara Expo 2016 in Singapore. An unexpected reveal for sure, we currently don’t have estimates on release date or pricing for J. For all we know he could disappear in to the vault of unreleased prototypes, but let’s hope not.

You may recall Kamen Rider J as the last of the trilogy of 90’s rider movies including Shin & ZO. Created after the official Showa period ended these three riders are still classified with their earlier predecessors rather than the Heisei segment of the franchise. If J is indeed released then that means the Showa era of Kamen Rider will officially be complete in figure form. All 15 main Showa riders will at least adorn your shelves together.

So what do you think about this reveal? Will it finally fill that longstanding hole in your collection? And as is often the question, where is Kiva, the long missing Heisei Rider? Sound off in the comments!