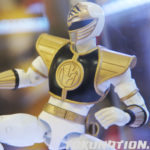 Our final gallery from this year’s Power Morphicon is here and it’s none other than the highly anticipated, incredibly popular 6.5″ figures from Bandai America‘s new Power Rangers Legacy line! Every figure scheduled through late spring of next year is on display, however we skipped the figures that have already been released. Enjoy some nice images of:

Announced at the show was the continuation of the line through late Fall 2017, as well as who is coming out in what assortment. Check out that list below!

Who are the mystery figures?! There’s some speculation that it’ll be a four person team – and we’re sure whomever it is will be thunderous!

Check out all our pictures of the Legacy Power Rangers figures by clicking the title of the story!