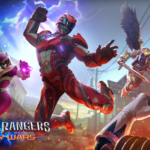 If Megabattle wasn’t your thing, we have good news for you: a brand new Power Rangers game is currently in development with Power Rangers Legacy Wars having just been announced via Gamespot.

Power Rangers Legacy Wars is a mobile fighting game that will feature characters not only from the upcoming Lionsgate movie but across other series in the franchise as well. No other information on the game is avalaible, aside from the fact that it’ll be developed for IOS and Android platforms.