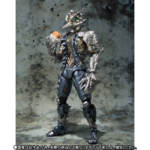 The 5th S.H. Figuarts release thus far from the wildly popular Kamen Rider Amazons web series, Mole Amazon is also the first character released from the show to not be an actual rider. Mole (Mamoru ) was of course the lovable and childlike Amazon who was part of the Nozama Peston Service with a penchant for eating hamburgers. So what release of this figure would complete without it’s own hamburger accessory!? Bandai has you covered there. Mole Amazon also includes parts to recreate his savage take down of Amazon Sigma and an open mouth part.

S.H. Figuarts Mole Amazon will be released in October 2017 as a Tamashii Web Exclusive for 7020 yen. Be sure to get in touch with your preferred exclusives middleman or service to reserve one soon!