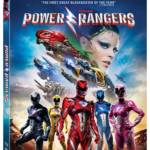 Lionsgate has finally announced details for the home release of their 2017 Power Rangers film! Now fans will finally have a chance to own this new era of Power Rangers lore!

Sadly, bonus features and other technical details for these releases have not been revealed at time of writing. Stay tuned to TokuNation as we keep you up to date on all Lionsgate Power Rangers news!