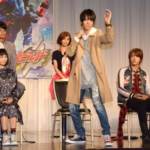 TOEI has completed their first official press conference for the 19th Heisei-Era Kamen Rider- Kamen Rider Build! We now have an extensive look at the cast & story of this new series!

*First up, the story: Kamen Rider Build takes place 10 years after a mysterious artifact called the PANDORAS BOX was found on Mars. The energy from this discovery created a SKY WALL that split Japan into 3 Zones, and awakened strange monsters known as SMASH! that prey on innocent people.

*Kamen Rider Build’s true name is Sento Kiryu! Sento will be played by Inukai Atsuhiro. He is described as a genius level physicist but also has no memory of his past- aside from a vague hint involving a creature known as Nitrogue.

*Sento is taken in by a cafe owner named Soichi Isurugi (played by Yasuyuki Maekawa) who supports the amnesiac scientist. Soichi has a young daughter, Misora (played by Kaho Takada) who possesses a unique ability to “Purify” the dark elements of SMASH.

*A mysterious young man named Ryuga Banjo (played by Eiji Akaso) may hold the key to Sento’s past- but Ryuga’s own past has plenty of secrets too; he’s an escaped convict accused of murder!

*Special Forces Chief Gentoku Himuro (played by Kensei Mikami) will be the one to hire Sento to investigate the Pandora’s Box & solve the mystery of the Sky Walls. He has a secretary, Shigeaki Utsumi (played by Yuki Ochi) instructed to closely monitor Kamen Rider Build’s actions.

*Lastly, Sento will receive support from a freelance journalist named Sawa Takigawa (played by Yukari Taki). She reports on attacks by the SMASH! creatures and may help Build unravel the secrets of his past.

And one final bit of information: the theme song for Kamen Rider Build will be titled Be The One! This song will be performed by a new music group, PANDORA!

Kamen Rider Build will officially begin on September 3, 2017! Stay tuned to TokuNation as we keep you up to date on this exciting new series!