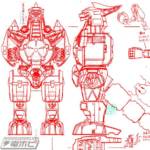 Collectors have speculated since GX-72 Daizyujin was released it’s been speculated whether it would sell well enough to warrant the release of more Zyuranger mecha. And Dragon Caesar has been at the top of many Japanese and Western fans’ wishlists. Well wait no longer, it appears that Soul of Chogokin Dragon Caesar is now in production!

Dengeki Hobby has released a scan of a the initial design work for Dragon Caesar, seen here via @TendouToys on twitter, seemingly confirming it’s forthcoming. While there are absolutely no release details available right now, this clearly points towards this mighty figure being released sometime next year. We’ll keep you up to date as more information becomes available for this release.