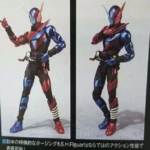 Currently we have no release date information or pricing for S.H. Figuarts Kamen Rider Build, but now that this image is circulating it will only be a matter of time! Thanks to the fine folks at @SHFindo for originally posting it.