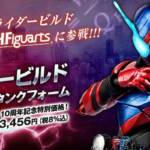 Bandai Tamashii has released a special promotional page for the next major entry in the SH Figuarts series- Kamen Rider Build!

The release details for Build RabbitTank have been confirmed thanks to this posting: Build is currently scheduled for release in February 2018– which will mark the TENTH ANNIVERSARY of the SH Figuarts series! In honor of this momentous occasion, SH Figuarts Kamen Rider Build will have special pricing: a very modest 3456 Yen before shipping and handling!

BUT THAT’S NOT ALL!

A video teaser uploaded by Bandai Tamashii gives fans a close look at SH Figuarts Build RabbitTank, AND offers a quick tease for the NEXT Kamen Rider Build Figuart release- the villainous NightRogue!

Stay tuned to TokuNation as we keep you up to date on any further reveals for SH Figuarts’ 10th anniversary!