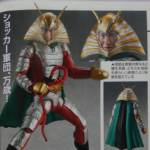 In a surprise reveal a magazine scan has just begun circulating showing off S.H. Figaurts Ambassador Hell! We’ve previously seen this iconic villains’ Kaijin form Garagaranda, on display at Tamashii Events. But this is a new reveal entirely. What’s most surprising is that Ambassador Hell appears to be a standard retail release, priced at 6480 yen with a release date of April 2017.

If you’re unfamiliar with the Ambassador Hell character, he hails from the original Kamen Rider TV series. A Shocker general based out of the western US, the character has made numerous appearances through out the rider franchise. As recently even as the 2016 Kamen Rider 1 film. He’s not to be confused with his brother Ambassador Darkness, who looks very similar and first appeared in the “Birth of the 10th! Kamen Rider All Together!” the Kamen Rider ZX film. Could Hell’s release signal Darkness on the horizon? Here’s hoping!