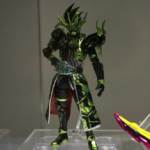 Rumor from @_Erasu on Twitter, from a trusted source, is that the Kamen Rider Cronus will come with both the Gamer Driver and Bugster-type versions of belts. Stay tuned for more information and, hopefully, better pictures! Picture courtesy of @YongouOYander on Twitter.’