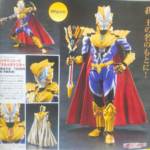 The latest batch of Figure Oh scans have revealed that S.H. Figuarts Ultraman Geed Royal Mega Master will be arriving soon! Previously revealed at the Tamashii Nations 2017 event, Ultraman Geed’s strongest form (a fusion of both Belial and Ultraman King) will be released this July as Tamashii web exclusive.

The images confirm that the figure will have a solid plastic cape split into three jointed sections, and come packaged with the form’s unique weapon – the King Sword.

Preorders will open soon, with the figure priced at 7020 yen. We’ll bring you more images as they come!