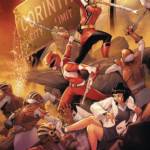 The original cover (shown in the image of this article) was easily one of the most popular covers revealed by BOOM! Studios previously as it features the Samurai Red Ranger Lauren as well as Dr.K in the Power Rangers RPM universe. But a change to the cover was spotted in a SyFy interview with the team behind the comic.

Click the title of the story to check out the new cover!