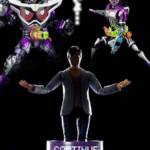 Another new release has just been teased for fans of Kamen Rider Ex-Aid and SH Figuarts!

This new teaser image suggests that DAN KUROTO himself will be obtaining a Figuart release! Even after previous entries for Kamen Rider Genm and the recently-teased Genm Level Billion fans are apparently STILL demanding more representation of this amazing character!

Sadly, no other information about this upcoming figure is available at time of writing- although based on the image, this release would include Kuroto’s CONTINUE pipe that allowed him to respawn when defeated.

Stay tuned to Tokunation for further details on this exciting release!