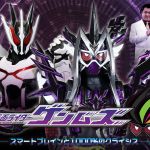 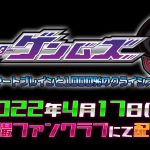 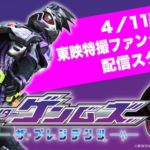 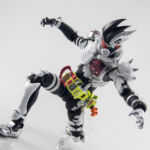 Everyone’s favourite zombie God is back for another yet another iteration, Bandai’s official S.H.Figuarts blog was recently updated with a plethora of new photos showcasing the S.H.Figuarts Kamen Rider Genm Level X-0 figure, first seen at a Tamashii Nations event way back in 2018.

Further release details on this bad boy are pending, and at this moment in time we aren’t sure if the Continue pipe will be included or not. None of the less, be sure to tune back with us once pre-orders become available and we’ll provide you with more info as it becomes available. 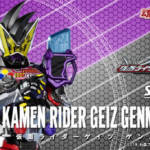 Premium Bandai has put up an official page for the next Kamen Rider Zi-O entry in the SH Figuarts figure series. The figure in question is Kamen Rider Geiz in his unique GenmArmor configuration!

This Premium SH Figuart is currently scheduled for release in June 2019! The price is a very modest 5940 Yen before shipping and fees.

The mighty Kuroto Dan has returned! Evil CEO turned Dangerous Zombie, now the one true Game Master has returned as Bugster! Revived thanks to Poppy the new Kuroto has 99 lives and all the time in the world to seek revenge on Kamen Rider Para-DX as well as his father Masamune. Back from the dead, this is our gallery & review of S.H. Figuarts Kamen Rider GenM Action Gamer Level 0!

GenM has made a couple outings in this line as Level 2, Level X, and even Level Billion at this point, but Level 0 is the first one to truly cash in on Kuroto’s massive popularity. A very minor repaint of Level 2, Level 0 includes a ton of new accessories like the Bug Visor Zwei, a God Kuroto Dan effect sheet, Life Point Counters, and even a Gashacon Breaker Blade. Even as similar as they are, this release does a fantastic job of setting itself apart. But is it really worth those Tamashii Web Exclusive dollars? Check out our gallery & review to find out!

The entire gallery is attached to this story, but you can also read our full review by clicking “Discuss on the TokuNaiton Forums” at the bottom of this post. Later this week we’re bringing Kuroto back one more time with a gallery of S.H. Figuarts Kamen Rider GenM God Maximum Gamer Level Billion!