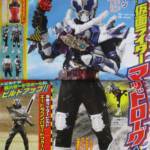 The latest round of magazine scans has begun circulating the Internet, giving fans a look at the future adventures of Kamen Rider Build!

Items of note this month:

*A new Rider will be joining the fray- Kamen Rider Mad Rogue! By using the Bat & Engine FullBottles along with the newly-discovered EvolDriver, this strange newcomer is armed with the Nebula SteamGun & SteamBlade. While Mad Rogue’s identity is unrevealed in the scans, there are SOME hints as to the face behind this Driver…

*In a desperate attempt to counter this new threat, Sento dusts off the HazardTrigger once again and tries out another Match- becoming Kamen Rider Build KeyDragon Hazard!

Definitely some exciting adventures ahead for Kamen Rider Build! Stay tuned to TokuNation as we keep you up to date on all Rider news!