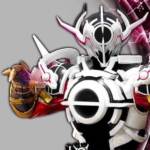 With every twist and turn, Kamen Rider Build continues to earn it’s place as one of the great series the Kamen Rider franchise has produced. One of the most interesting things about the series has become it’s main antagonist, Evolt. Now, Kamen Rider Evol. As he continues to possess other people and gain new forms, episode 36 finally gave us a glimpse in silhouette of what is to be his ultimate evolution.

Today, we finally have our first look at the physical suit for this final form, Kamen Rider Evol Black Hole! This form has been previously glimpsed only in toy catalog scans back in February These new images come courtesy of @TokuParadox on twitter. Primarily a reuse of the his standard Evol Cobra Form, Black Hole swaps the torso’s primary colors for black & white and features the addition of the Evol Trigger to the Evol Driver. How soon could we see this ultimate evil realized? Likely just in time for Sento to finally gain his Genius form to stop him!