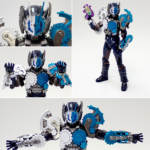 While a heavily watermarked scan from Figure Oh appeared yesterday confirming that this release was on the way, we now have a great selection of in hand images as well. The next release from Kamen Rider Build will be S.H. Figuarts Hell Bros!

The combined form of Engine Bros & Remocon Bros, Hell Bros is the first of the Kaiser family of characters to be released in the line. The official S.H. Figuarts Blog has shared this selection of in hand prototype images giving us a great idea of what to expect from the final release. Based on the excellent Night Rogue/Blood Stalk mold, Hell Bros looks like he’ll fit in just perfectly with your Build Collection.

While release month & price are not included in the blog post, we do know that pre-orders will begin through the Tamashii Web Shop on July 27th. We’ll let you know when final official images, and release info are available.