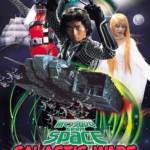 Another special announcement for fans of obscure & old-school tokusatsu shows!

Discotek Media has officially announced a release for the 1978-79 series Message From Space: Galactic Wars. This series was a spin-off from the 1978 film Message From Space written by legendary tokusatsu godfather Shotaro Ishinomori himself!

Unfortunately, price & release details for this set are unavailable at time of writing. Stay tuned to TokuNation as we keep you up to date on this rare endeavor!