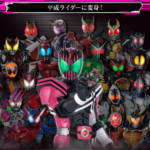 To celebrate the return of the Destroyer Of Worlds, Premium Bandai has announced a special new release of Kamen Rider Decade‘s signature henshin device- the DecaDriver!

Labeled as the Neo DecaDriver this new device is an upgrade on Kamen Rider Decade’s original powers now granting Tsukasa the ability to henshin into ALL Heisei-Era Kamen Riders; from Kamen Rider Kuuga to Kamen Rider Zi-O!

The DX Neo DecaDriver is currently scheduled for release in March 2019! The price is a very modest 9180 Yen before shipping and handling.