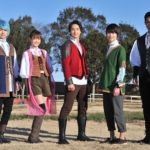 Our long awaited cast reveal for the much-anticipated Kishiryu Sentai Ryusoulger is finally here! Thanks to a press conference which was held in Japan earlier today, the 43rd Super Sentai will comprise of:

Tyamigo, the dinosaur partner of Ryusoul Red will be voiced by Masaki Terasoma whose past roles include Kintaros from Kamen Rider Den -O and Shadow Moon of Kamen Rider Black fame.

To coincide with this, a second trailer for the show went live giving us a glimpse at the team’s personalities through roll call. While there isn’t a Youtube link at the time of this writing, you can view that trailer by making the jump here