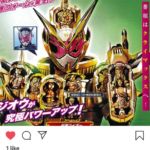 This is Kamen Rider Grand Zi-O! The King of Time gains new golden armor, decorated with trophies representing the various Heisei Riders that came before him .

The power of Grand Zi-O comes from the Grand RideWatch, whose origins remain untold at time of writing.

UPDATE: An image of the DX Grand RideWatch has now been released!